Hi, guys! Hope you are all prepared to talk about one of the most expected books for March: The Bone Witch, by Rin Chupeco! ❤ Since I first glimpsed this book, I just knew I HAD to read it and I did, which means time for a review!

I received my review copy from the publisher through The Fantastic Flying Book Club in exchange for an honest review during FFBC’s tour for this book. Thank you all once again!!

The beast raged; it punctured the air with its spite. But the girl was fiercer.

Tea is different from the other witches in her family. Her gift for necromancy makes her a bone witch, who are feared and ostracized in the kingdom. For theirs is a powerful, elemental magic that can reach beyond the boundaries of the living—and of the human.

Great power comes at a price, forcing Tea to leave her homeland to train under the guidance of an older, wiser bone witch. There, Tea puts all of her energy into becoming an asha, learning to control her elemental magic and those beasts who will submit by no other force. And Tea must be strong—stronger than she even believes possible. Because war is brewing in the eight kingdoms, war that will threaten the sovereignty of her homeland…and threaten the very survival of those she loves.

The Bone Witch is, hands down, the most beautifully written book I’ve read in 2017. The lyrical narrative, rich in descriptions and feelings, gives the reader that sensation of being with Tea as soon as we close our eyes. The characters are well built and in constant grown, which was really nice. The magical aspect, world building, it all was fantastic. My only critic is that this book could have been about a hundred pages shorter – sometimes, the description went a little over the top and dragged the plot. Still, I can’t wait for the next book and give this one four proud stars =D

The narrative is majorly first person styled, from Tea’s point of view, but there’s a catch: Tea is telling the story when she’s older and we can see glimpses of the “present” Tea as she introduces us to her past. I found this to be ingenious, as I’m not a fan of first person narratives overall exactly because the main character tends to get overwhelmed by things (not their fault) and irritate me. As Tea is older, wiser, she tells us about her wonder alright without all the “OMGs”. It worked wonderfully for me, haha! Also, Chupeco’s writing style definitely won me since page one, even when I wanted to slap her for losing time in some weird descriptions and forgetting the plot, haha!

And talking about the plot. I must warn you guys that this book is HIGHLY introductory. Seriously. You learn about Tea, the kingdoms, the world, the functioning of things, the magic, and theeeen we move on to a spark of plot just to be left hanging and wanting the second volume. It’s not necessarily a bad thing, but if you, like me, is an anxious wrack, wait for the second volume to come out before picking up this series or you’ll end up frustrated 😉

The characters are very tricky on this book, to be honest. They are so real that I found it hard to understand their motives in an overall manner until it was “too late”, haha! I think Fox and Mykaela were my favorites, because to this moment, I feel like I haven’t figured both out? Oh, Fox is Tea’s undead brother and Mykaela is her mentor in the asha world. Tea herself isn’t a bad protagonist, but as the book has this heavy introductory feeling, I found it hard to connect with her and feel her personality. Maybe we can try again on book 2, hahaha!

I also need to make a note on the magic inside this story. Chupeco did A HELL OF A JOB creating all of this and omg, I’m so in love. I wish I had my own heartglass, I wish I could be a Dark asha like Tea (I always liked the dead better than the living; they’re quieter and never let me down), I wish I could have breathed the magical air and fought the daevas and other monsters. Seriously, Chupeco, can I be inside the next book?

And now, the moment you all were waiting for: QUOTES TIME! This book is filled with wisdom that we can take for life, so I had a really hard time choosing my favorite quotes among everything I highlighted, ugh!

“You think in the same way men drink, Tea. Far too much – under the delusion it is too little.” – Tea’s father

“Sometimes, you can’t help who you love or for how long.” – Rose, Tea’s sister

Only then did I see how terribly old the woman was. Not from the passage of years, but from seeing too much of what most would rather see little of. – Tea’s thoughts

“Sometimes, it is good to remind ourselves how bitterness tastes.” – Tea

This cover is magical. All the golden swirls, the shades of purple, the girl alone in the mountain, the center of the skull… I’m in love. There’s magic, there’s mystery, danger, beauty… Everything! Also, the simple font used in both the title and the author’s name did the rest of the magic, as a flourished font wouldn’t go well with all the swirls in gold. A master piece in covers!

Thank you so much for reading! Also, thanks again to The Fantasy Flying Book Club and for the publisher for my review copy ❤ Bellow, you can find more information about both book and author and an awesome giveaway!

The Bone Witch is available in ebook, paperback, hardcover and audiobook formats at our favorite book sellers! No excuse to skip this gem, guys ;D

Rin is the best. As if sketching the eight types of ashas – one for each kingdom of The Bone Witch, of course – wasn’t awesome enough, Rin also developed a quiz for us to find out in which kingdom we’d belong to! /o/

WHAT IS MY ASHA?

Here are all eight ashas: 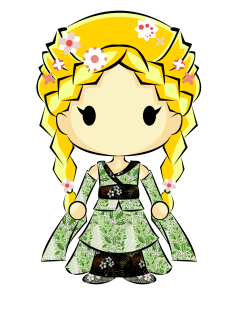 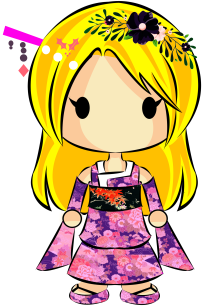 Which one is yours? =D After taking the test, I discovered I am…

Oh, and make sure to take a look at Rin’s board for The Bone Witch on Pinterest =D

Rin Chupeco wrote obscure manuals for complicated computer programs, talked people out of their money at event shows, and did many other terrible things. She now writes about ghosts and fairy tales but is still sometimes mistaken for a revenant. She wrote The Girl from the Well, its sequel, The Suffering, and The Bone Witch, the first book of a new YA Fantasy trilogy.

There will be THREE INTERNATIONAL winners!