Hiii, there! I’m back from the dead and disappeared to talk about a book that I found out about thanks to the lovely Beth, at the Betwixt the Pages (go follow her, she’s awesome! Plus, she also read this book, giving you two different visions of it!), and that I couldn’t wait to start! I’m talking about Queens of Geek, from Jen Wilde ❤ I received my copy from Xpresso Book Tours in exchange for an honest review during their book tour for Queens of Geek and here we go! Thanks, guys!!! (And a special hug to awesome Giselle <3) 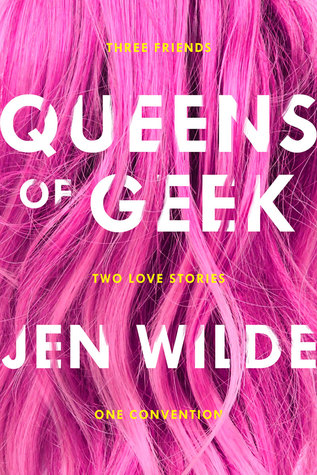 Charlie likes to stand out. She’s a vlogger and actress promoting her first movie at SupaCon, and this is her chance to show fans she’s over her public breakup with co-star Reese Ryan. When internet-famous cool-girl actress Alyssa Huntington arrives as a surprise guest, it seems Charlie’s long-time crush on her isn’t as one-sided as she thought.

Taylor likes to blend in. Her brain is wired differently, making her fear change. And there’s one thing in her life she knows will never change: her friendship with her best guy friend Jamie—no matter how much she may secretly want it to. But when she hears about a fan contest for her favorite fandom, she starts to rethink her rules on playing it safe.

Queens of Geek, an empowering young adult novel by Jen Wilde, is all about fandom, friendship, and finding the courage to be yourself.

Just remembering those were my impressions and opinion as a reader 🙂

This book was magical for me. All the fangirling, the friendship, the intensity, the characters… OMG, THIS BOOK. I really loved it and I love how open it is about so many touchy subjects, like mental health, sexual discovery and prejudice. I gave it five full stars, but I’ll be honest: I expected to connect with the characters on a deeper level. I felt like the characters allowed their sexuality or their mental health state brand them all the time and I don’t really like it. I’m a fat kid. I’m a geek. I love books. I suffer with anxiety. I battle depression. I like boys. But, before all this brands apply, I’m Annelise. Being Annelise is so much more important to me than being fat, geek, bookworm, anxious, depressed or even heterosexual. I think I missed this side of characters in the end and not even strong and confident Charlie showed me this. Oh, well. Still a great book =)

The narrative is first person with alternating points of view between Taylor and Charlie. I loved both characters and we could see in whose head we were even without Wild telling us so! Even not being my favorite style, it works brilliantly for Queens of Geek, as it gets easier to understand all the struggles that both Charlie and Taylor go through. Wilde’s writing style is exactly what you’d read on a blog or social media, but without overdoing it on the acronyms, which I loved. It was the perfect mix between ‘right now’ speech and proper grammar, if that makes sense? Hahaha

The plot was simple, with no big mysteries or problems to be solved, but that doesn’t mean they are easy either. I do think the hardest problems to solve are always those that involve other people around you, as the human being tends to be quite volatile. Messing up with human interactions can be ten times more scarier than the zombie apocalypse, if you ask me.

I already rambled a bit about characters, sooo I’m just going to say that I LOVED Alyssa, Charlie’s love interest, and that I admire her to the core. I’d date this girl too without a second thought, she was that awesome ❤ I also highly identified with her in many levels, never mind she was a side character, haha! Jamie was also the sweetest dork in the world and Tay doesn’t even know how lucky she is for having him around, accepting her just the way she is ❤

Also, in a rare moment of Bethyness (the act of thinking like my bff Beth, from Betwixt the Pages), I found a song that applies perfectly to this book. Kids from 2004 may remember this pearl which I sing at the top of my longs since before understanding a word of English: I Am, by Hilary Duff. You can laugh at me all you want, THIS SONG IS QUEENS OF GEEK ALL OVER.

Pink hair. Must I say more? Yes? Oh, okay. I LOVE PINK HAIR! It was one of the reasons why I was so insanely excited to read this book. One of my dreams is to have candy color hair someday, rainbow style, but due health problems, I can’t do it. I can only dye it in colors that don’t require me to take off the natural pigment and it sucks. So, this cover is my dream, complete with a master design that entwines the pink hair with the words and chose a simple and strong type font for all the wordings. The yellow was also a killer choice, in contrast with the pink. WELL DONE, PEOPLE!

Nothing better to sell you the book than the book itself! I present you some of the gems inside Queens of Geek!

Let’s be real; I don’t feel safe in the real world. It’s big and scary and confuses the shit out of me sometimes. – Taylor’s Tumblr posts

“I have never seen you [Taylor] so pissed before. And yet in all your rage, you still managed to slip in a movie reference. You’re good.” – Jamie

“Love is intense. You break down all your walls to let someone in. But if they’re not good for you, they can tear you up from the inside. And you think what you have together is love, so you let them.” – Alyssa

“We’re all messy. What kind of friends would we be if we demanded you only show us your prettiness? This isn’t Instagram, it’s real life. And real life is messy.” – Charlie

And this killer dialogue:

Taylor: Thanks. No one’s ever risked getting beat up just to get me tomato sauce before. I thought he was going to pound you into the ground like in those old Looney Tunes cartoons.

Taylor: The lady is grateful.

Overall, if you like YA, fangirling, intense characters, vloggers and youtubers, and all about the media culture of the second half of the 21st century, READ. THIS. BOOK.

And that’s it! Thank you so much for reading and thanks again to Xpresso Book Tours for my review copy =) Bellow, you can find more info about the book and the author, plus purchase links!

Jen Wilde is a writer, geek and fangirl with a penchant for coffee, books and pugs. She writes YA stories about zombies (AS THEY RISE), witches (ECHO OF THE WITCH) and fangirls (QUEENS OF GEEK). Her debut series reached over three million reads online and became an Amazon bestseller.

When she’s not writing, Jen loves binge-watching her favorite shows on Netflix, eating pizza, traveling to far away places and going to conventions in Marty McFly cosplay.

Jen lives in a sunny beachside town in Australia with her husband and their cheeky pug, aptly named Heisenberg.

11 thoughts on “Queens of Geek, from Jen Wilde”