Hi, there! Hope everyone had a wonderful Sunday 🙂 I wish I had been more productive this weekend, but to tell you all the truth, I was too tired. I needed my 22 hours of sleep (yes, I’ve slept 11 hours in a roll from Friday to Saturday and another 11 hours from Saturday to Sunday) and I needed my I’m-doing-nothing-time too. Also, I hang out Instagram a lot today, something that I could hardly afford this week. I’m getting there 🙂

Anyway, let’s talk about our TBR of the Week: I chose the first volume of Hearts and Arrows, by Staci Hart: Deer in Headlights 🙂 I won this book through the author’s newsletter a couple of weeks ago and sounds cool: 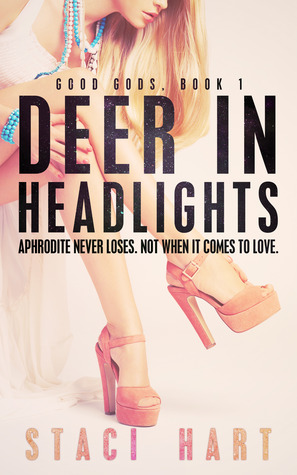 END_OF_DOCUMENT_TOKEN_TO_BE_REPLACED

Hi, there! Welcome to book cover reveal #2! Another contemporary book that warmed my heart with the blurb alone, haha! I’m talking about Wasted Words, by Staci Heart ❤ And this reveal is on Give Me Books!

Some universal truths refuse to be ignored.

Peanut butter and jelly are a match made in heaven. Spaghetti and meatballs are best friends forever. And guys like Tyler Knight don’t go for girls like Cam Emerson.

She knew from the second she met him that he didn’t belong on her bookshelf, the six-foot-six ex-tight end with a face so all-American, it could have sold apple pie. So she shelved him next to the supermodels and rock stars and took her place on her own shelf — the one with the flannel-clad, pasty-faced comic book nerds. Most of her boyfriends have existed between the pages of books, but rather than worrying over her own lacking love life, she puts all her energy into playing Cupid, using her job at the book bar, Wasted Words, as her stomping ground.

Tyler Knight always looks on the bright side. His career-ending injury turned into a job as a sports agent. A horrible breakup led him to Cam, his quirky, smart roommate who is far more beautiful than she realizes. She’s made it perfectly clear she’s not interested in him — not like that at least — but if she ever changes her mind, he won’t hesitate. Because he doesn’t see the lines she’s drawn between them, as much as she insists that they’re there. Deep down he knows that despite their differences, they’re a match well made.

Staci has been a lot of things up to this point in her life: a graphic designer, an entrepreneur, a seamstress, a clothing and handbag designer, a waitress. Can’t forget that. She’s also been a mom, with three little girls who are sure to grow up to break a number of hearts. She’s been a wife, even though she’s certainly not the cleanest, or the best cook. She’s also super, duper fun at a party, especially if she’s been drinking whiskey. Her favorite word starts with f and ends with k.

From roots in Houston, to a seven year stint in Southern California, Staci and her family ended up settling somewhere in between and equally north, in Denver. They are new enough that snow is still magical. When she’s not writing, she’s sleeping, cleaning, or designing graphics.

I’m soo excited about this book! Thanks for reading 🙂