Hello, dearies! Welcome to the blog tour for the first book in the Juniper Falls series, by Julie Cross: Off The Ice! In this post, you’ll find more info about the book and the author, a playlist, my cover analysis and an incredible giveaway! 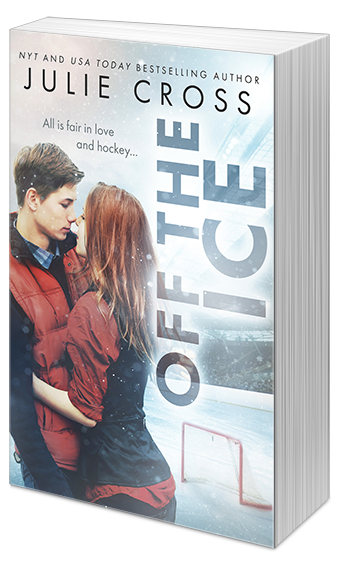 All is fair in love and hockey…

Claire O’Connor is back in Juniper Falls, but that doesn’t mean she wants to be. One semester off, that’s what she promised herself. Just long enough to take care of her father and keep the family business—a hockey bar beside the ice rink—afloat. After that, she’s getting the hell out. Again.

Enter Tate Tanley. What happened between them the night before she left town resurfaces the second they lay eyes on each other. But the guy she remembers has been replaced by a total hottie. When Tate is unexpectedly called in to take over for the hockey team’s star goalie, suddenly he’s in the spotlight and on his way to becoming just another egotistical varsity hockey player. And Claire’s sworn off Juniper Falls hockey players for good.

It’s the absolute worst time to fall in love.

For Tate and Claire, hockey isn’t just a game. And they both might not survive a body check to the heart.

END_OF_DOCUMENT_TOKEN_TO_BE_REPLACED

Hi, there! Welcome to the cover reveal for Chasing Truth, by Julie Cross 🙂 This reveal is hosted by Chapter by Chapter.

Confession time: I have to say that I signed up for this reveal in the dark: they didn’t provide a blurb for us, just the name of the book and the publisher. I was dead curious (I’m a journalist, after all) and I trusted the publisher, as Entangled Teen has some pretty awesome books. Reading the blurb and seeing the cover now, I don’t know if I’d pick this book up, to be honest

I make a point of only reviewing/promoting books that I genuinely like and have an interest in, but unfortunately I already had compromised myself to post this cover reveal, so here we go and I’m sorry! I promise I won’t sign up for stuff in the dark again.

At Holden Prep, the rich and powerful rule the school—and they’ll do just about anything to keep their dirty little secrets hidden.

Eleanor might not trust him—she doesn’t even like him—but they can’t keep their hands off of each other. Fighting the infuriating attraction is almost as hard as ignoring the fact that Miles isn’t telling her the truth…and that there’s a good chance he thinks she’s the killer.

Here’s what Julie has to say about the cover:

I’m so excited to reveal this cover! I saw it months ago and not only loved it, but felt like I finally had something tangible to show the vibe of this story. Chasing Truth began as a teen romance featuring a girl with a unique past–she’s from a family of con-artists. Until recently, Ellie spent her entire life living under multiple identities, being everyone and anyone. So falling for new neighbor, Miles, as herself is brand new territory and that definitely creates a bit of a rocky relationship for my two leads. While the story is still built on all of that, it also evolved into a slightly different recipe as I wrote.

Chasing Truth is 1 part mystery/thriller, 1 part high school drama, 1 part family story, and 2 parts (maybe 3…) romance. If you’re a fan of the TV series Veronica Mars, you’ll find that Chasing Truth has a similar feel. I can’t wait for all of you to have a chance to the read the book in September, but for now, I’ll have to settle for showing off this beautiful cover!

She’s also the author of the Letters to Nowhere series, Whatever Life Throws at You, Third Degree, Halfway Perfect, and many more to come!

Julie lives in Central Illinois with her husband and three children. She’s a former gymnast, longtime gymnastics fan, coach, and former Gymnastics Program Director with the YMCA.
She’s a lover of books, devouring several novels a week, especially in the young adult and new adult genres.

Outside of her reading and writing cred, Julie Cross is a committed–but not talented–long distance runner, creator of imaginary beach vacations, Midwest bipolar weather survivor, expired CPR certification card holder, as well as a ponytail and gym shoe addict.

That’s it, thanks for reading and once again, I’m sorry for showing a book that isn’t really my cup of tea. Regarding promotions, this won’t happen again 🙂