Good day, darlings! Welcome to the book blitz for Terrence, by Alice Rachel! In this post, you’ll find overall info about book and author, an excerpt, my cover analysis and a giveaway! 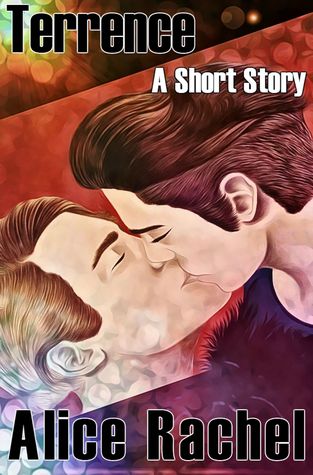 Bullying is nothing new to Terrence Young. The teasing and harassment are constant. His family is less than understanding as well. To them, Terrence chose to be gay and complicate their lives. Their little rejections sting and cut him deeply.

But when the Deviance Act is passed, Terrence’s life takes a turn for the worse overnight. Under the new law, a mere look, a simple touch, or a small kiss in public could mean death. Terrence attempts to hide his orientation to survive. That is until a gang attacks him in a bar and Chase Martinez interferes.

Chase is gorgeous, kind-hearted, and he’s a rebel in the Underground—all qualities that attract Terrence so much there is no stopping the fall. Loving Chase might be dangerous, but Terrence is done living in fear and letting others dictate what is right for him.

*The author pledges to donate 100% of sales revenue from “Terrence: A Short Story” to The Ally Coalition

Terrence is already available in both ebook and paperback formats!

He moved fast and pushed me hard against the wall, with one hand flat against my chest. Then he swept the area with one quick glance before he pressed his lips against mine, harsh and demanding. I should have pushed him back, but I’d been craving his touch since he’d walked up my front steps. And his mouth against mine felt way too good. Death be damned if it meant having Chase’s warm body flush against mine like this.

His lips melted over mine, warm though wet from the rain, while his tongue softly parted my mouth. No one had ever kissed me the way he did, like he was worshiping me. He raised his hand to my jaw and wrapped his fingers gently around my neck. I was turning into a puddle at his feet, and he didn’t stop until I forced myself to push him back. I regained my senses, and reality slapped me in the face. Chase had put us both in a dangerous position, and I couldn’t let him do that again.

“Don’t let them kill my mood,” he said with a lopsided grin, and it took all I had to walk past him and make my way under his arm. He grabbed my wrist, but I shook him away.

“You coming to my place afterward?” he asked.

The hint of hope in his voice took me aback. I nodded, and a genuine smile flashed on his face. He pulled me to him again before I could react, and he wrapped his arms tightly around my waist. A devilish glint shone in his blue eyes before he whispered dirty words in my ear. The flush on my face rose fast, and I couldn’t quiet the tiny squeal escaping my throat.

“What does that mean?”

He winked but never answered my question.

Risking sounding like a broken record, I’m not usually a fan of illustrated covers with humans, but I found yet another exception to my rule in the form of Terrence. While I do think there’s much room for improvement on this cover, especially on the writings and type font choices, I was a goner for the image, haha!

Alice Rachel is the author of the YA Forbidden Romance/ Dystopian Romance Series “Under Ground.” Her time is divided between teaching French, writing, reading, drawing, and spending time with her hubby and guinea pigs.

Alice loves talking to readers, so send her a message!

This giveaway will have TWO lucky INTERNATIONAL winners!

Winner #2 will take home a paperback copy of Terrence!

That’s it! Thank you for reading ❤ And don’t forget: if you purchase a copy of Terrence, you’ll be helping to support The Ally Coalition and LGBT equality!