Good morning! Am I a productive panda or what? Welcome to, believe it or not, ANOTHER REVIEW! =D #feelthepandaboss

This time, our subject is the second book in the Seduction series, from Lauren Smith: The Rakehell’s Seduction! I have received my copy from Barclay Publicity in exchange for an honest review and here we go! Thank you, guys! 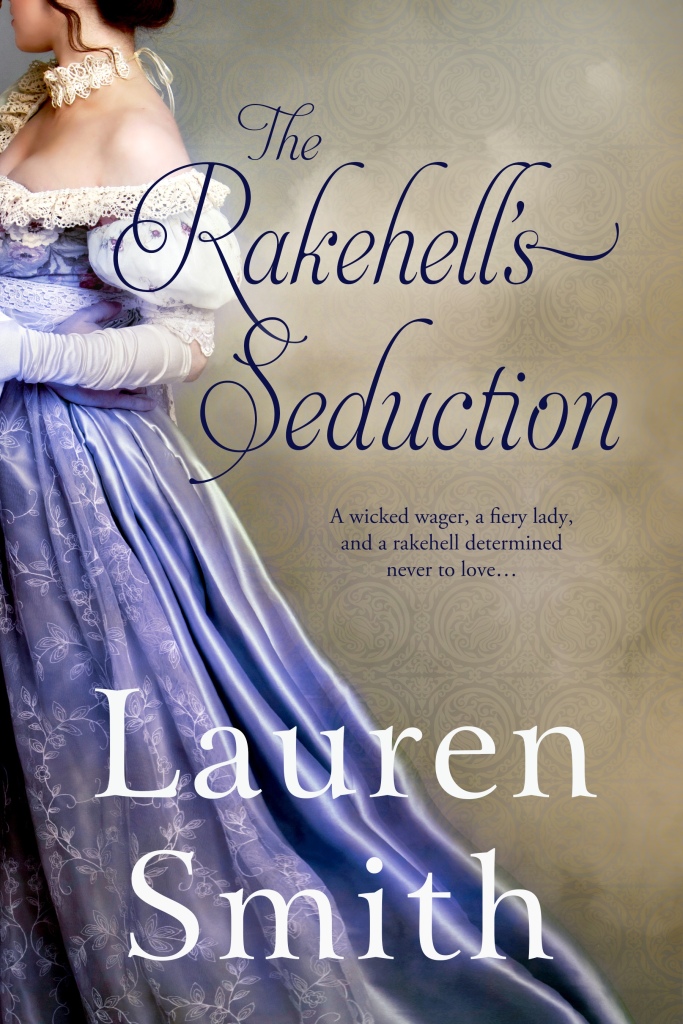 HE’S MADE A DANGEROUS WAGER

Ambrose Worthing is no gentleman. He’s a proud cold-hearted rake who’s determined to stay a bachelor forever. He enjoys bedding a different woman every night without the risk of falling in love. When he hears about a wager over the seduction and ruination of the daughter of his father’s best friend, he knows he must intervene. Committing himself to the bet, he agrees to seduce Lady Alexandra Rockford—for her own good. He never expected the lady in question to be a beautiful, fiery creature who has passions of her own that call to his guarded heart.

Alexandra Rockford has sworn off men, her heart still broken from the false promises of a childhood sweetheart who left her to marry an heiress. When she stumbles into Ambrose outside of a country ball, she knows the rake is trouble. His smile, his touch, his forbidden kiss are all too tempting but being with him would ruin her. Determined to enjoy herself without falling in love, Alex can’t help but let her defenses down with the too charming rake. But when she discovers Ambrose is seducing her to win a bet, it will take everything Ambrose has to prove to her that he is worthy to love her.

I’d like to open this review by saying that I’m a HUGE fan of historical romances, of any kind, but especially of sugared ones. The Rakehell’s Seduction is an adorable romance with good characters and very few problems in my humble opinion.

You see, the thing is, while The Rakehell’s Seduction has wonderful characters and an amazing plotline, the few problems it had were enough to kill a lot my buzz. While I loved the fact that both Alexandra and Ambrose are strong and decided characters, I found their behaviors inconsistent with their personalities, making it hard for me to believe in what I was reading. And then there is this HUGE vibe of instalove – see, not sexual desire, L-O-V-E – that buried it for me. Put all of this together with both characters constantly repeating the same thoughts in their heads – many times, with whole sentences alike other pages! – and you have only a mildly impressed panda, resulting in a three stars read.

I knooow, I’m an awful panda! Bad, bad panda! The truth is that I demand too much of 95% of the books that I read. The Rakehell’s Seduction is a wonderful book for fans of the historical romance scenery, trust me; it’s totally a “it’s not you, it’s me” kind of situation. I have gotten into feverish arguments with offline friends because of my high demand on every damn book that I read. Even 5 stars reads usually have some room for improvement, if you ask me or if you read my reviews – you’ll notice I almost always have a complaint even about my top favorite books ever, haha!

Yeah, that much is quite true, isn’t it?? I do apologize for that =( Buuut, let’s focus on the nice things, right? =D

The narrative style is third person styled, switching points of view between Alexandra and Ambrose. I did liked both well enough as narrators, but suffered from the repetition syndrome. More of that in a moment, haha! Now, I must compliment Smith on the writing style and on the world construction. Besides building beautiful and detailed sceneries without being boring, Smith gave me a hell of a vocabulary class! For the new and/or forgetful friends here gathered today, I’m not a native-English speaker 😉 I always highlight words that I don’t know or am not sure about the meaning during my reads and omg, I feel so smarter after this book! THANKS SO MUCH, SMITH!! ❤ ❤

The plot was simple, but filled with popping twists, haha! Each time I felt the story wrapping up – never mind the track counter in the corner of the Kindle app page – it seemed that Smith held my hand and said: “just a moment, little Lady; we’re not done here”. And then I was thrown into a new revelation ❤

The characters are the tricky part and where the book practically lost its stars with me. As I said before, I had a hard time believing their behavior because of serious inconstancies of personality, both in Alexandra and Ambrose. Sometimes, it felt like they had double personalities and, while this isn’t exactly a problem in real life, I feel this wasn’t Smith’s intention. Also, both of them revolve the same subject too many times in their heads, to the point of exhaustion for the reader – in the same sentences as well. The painful eye rolls were so real. And, to make things even worse, they didn’t revealed their past problems in small doses – at least, I felt like they just dumped their elephants together into the room and waited for the babies to come, you know? Nevertheless, I’m a freak, a perfectionist and people often call me a bitch for overanalyzing everything in books, so what do I know of life?

I LOVED IT. Oh, you needed more? Okay, I’ll try. I’m a sucker for the “classic” covers in sugared historical romances. I love these baroque illustrations, filled with sensuality and class at the same time, you know? ESPECIALLY IF THEY INVOLVE BEAUTIFUL DRESSES! Seriously, if corsets weren’t such a pain in the ass, I would make a point of only wearing 19th century clothing, haha! I’m that bigger of a sucker for them.

All that said, this beautiful purple dress in combination with the farfetched handwriting in the title of the book went straight to my head and made me weak in the knees, haha! The quick description on the cover above the title also worked wonders to make sure the space wasn’t totally empty nor too polluted with too much info. The font style used on Lauren’s name also worked to contrast with the nobility of the title. The slight curves of the letters help the harmony, along with the option for white.

What I’m trying to say is: can I have a paperback of this on my shelves? Hahaha

Noooow, the quotes! I love to quote books because you don’t need to believe in my opinion to check out the awesomeness first-handed =)

“Winter is a beautiful season. Everything is silver and light and filled with mystery. When I think of you [Alexandra], I think of those quiet mornings when snow has freshly covered the forest trails and everything feels different, new, and mysterious.” – Ambrose

He doesn’t trust me. She could see it in his eyes, but he was attempting to fool her. Clever man. – Alexandra’s thoughts.

And this killer dialogue:

Alex: Today was rather wonderful. It was quite perfect.

Ambrose: I have to agree. I was woken up far too early, had to dine on salty porridge, was lost in a cow field where I almost fell on my arse when I slipped in cow dung, and was soundly beaten at croquet by two ladies. Yes, absolutely splendid day.

Thanks so much for reading! Also, thanks again to Barclay Publicity for my review copy!

I hope I got your spirits up for The Rakehell’s Seduction, because dear Lauren Smith talked with both Alexandra and Ambrose and made them explain what the hate most about their opposite genders, haha! =D Also, you’ll find bellow more information of the book, the author where to purchase the book and a wonderful giveaway!

Alexandra and Ambrose open their hearts for us and tells us why both men and women are just THE. WORST! ;D

1) Refusing to let a man kiss her, even when she’s gazing at him with hunger and desire as though she wished for nothing more than to be kissed senseless.

2) Knee a man in the bullocks when he tries to steal a kiss. Doesn’t she knew how much that bloody hurts?

3) Not listening to reason. It’s not every day I try to save a girl by seducing her for her own good.

4) When she underestimates how dangerous the betting books at a gentleman’s club are.

5) When she breaks a man’s heart even when he grovels at her feet begging to be forgiven because he can’t imagine life without her.

1) When a man assumes he just kiss a woman in a garden without any introduction simply because he’s a notorious rakehell. It doesn’t matter wicked his smile is or how handsome he might be.

3) Lying about his intentions to a woman. He should never conceal his true purpose in meeting a woman, especially when he’s come to ruin her reputation.

4) When a man believes he knows how to protect a woman better than she does herself. Women aren’t as helpless as men like to think they are and a man should respect a woman and her strength.

5) When he breaks a woman’s heart by being so perfect that she falls in love with him, only to realize that everything about him was a lie.

Thanks so much to Lauren Smith for the patience to gather these two in the same run and conduct the interview, haha! ❤

The Rakehell’s Seduction is available in both ebook and paperback formats!

Amazon Best-Selling Author Lauren Smith is an attorney by day, author by night, who pens adventurous and edgy romance stories by the light of her smart phone flashlight app. She’s a native Oklahoman who lives with her three pets: a feisty chinchilla, sophisticated cat and dapper little schnauzer. She’s won multiple awards in several romance subgenres including being an Amazon.com Breakthrough Novel Award Quarter-Finalist and a Semi-Finalist for the Mary Wollstonecraft Shelley Award. 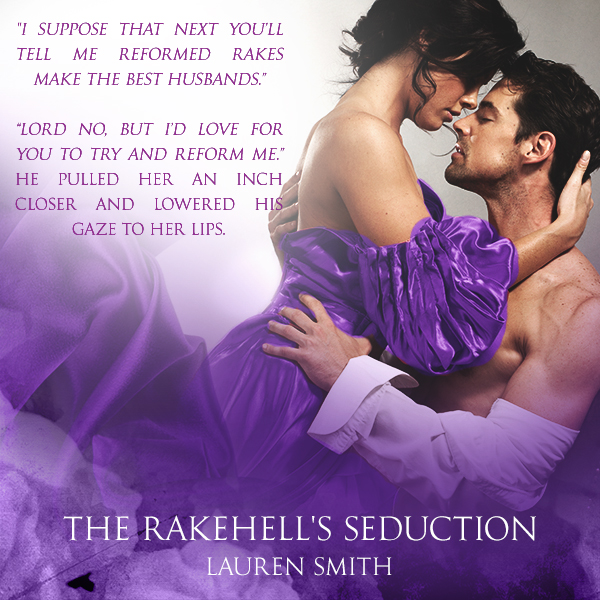 One lucky INTERNATIONAL winner will take home a $25 Amazon Gift Card + a signed print copy of any of Lauren Smith’s Backlist!

One thought on “The Rakehell’s Seduction, from Lauren Smith (Seduction #2)”