(alternative title: SOMEONE PLEASE TELL ME I HAVE BOOK 2 ON MY EREADER ALREADY, I’M DYING WITH THAT END)

Hello, turkey-stuffed friends! Or at least I hope I am not the only panda around that won, like 3074389302 tons since Christmas eve? Hahaha! But it’s okay if I am, I’ll soon go back to eating only bamboo and I’ll lose the hotness all over again #what

But don’t worry, we aren’t here today to discuss my diet or lack of one! I actually want to scream and fangirl talk about Boy Band, first book in the homonymous series by AWESOMETASTIC Jacqueline E. Smith! I have received a copy of this book and its sequel, Backstage, in exchange for an honest review and the moment is way over late here! Thanks so much again, Jackie! I’m a big fan, but I’m afraid you’ll have to put up with some ranting as well, haha! 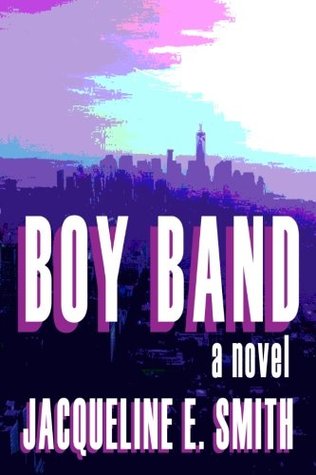 Melissa Parker and Sam Morneau have been best friends forever. The kind of friends that have sleepovers, share food, drinks, their families… Whatever the other part needs or wants. No matter how big is their circle of friends, Mel and Sam always end up glued to each other and everybody is used to their twin deal and bizarre relationship.

Unfortunately, Mel’s tale has some glitches: first, Sam is one of the five guys that form The Kind of September, a. k. a. the world’s current greatest boy band. It’s been two and a half years of song recording, shows, tours, interviews and loving fans. SO. MANY. FANS. While Mel isn’t on the spotlight – she is just the band’s photographer, after all – she has been following the guys around since they started the band and witnesses all the wonders and craziness of the VIP world.

If you still think Mel’s life is a paradise, here’s glitch number two: Mel has been in love with Sam since always. How do you confess to someone who can have anyone he wishes? How to show Sam that her feelings were there even before the fame?

How to live without her other half if Sam doesn’t loves her back?

Jacqueline currently has two published book series: Boy Band and The Cemetery Tours. Both series are totally and completely different in EVERYTHING and I, after reading all available books so far in both, it’s with some degree of security that I can say this: Jacqueline E. Smith can write whatever she wants AND IT WILL BE FUCKING AMAZING, OK? BECAUSE SHE IS THAT GOOD! Boy Band had all the potential elements to make me run away screaming: first person narrative from the point of view of a teenager girl, secret crush on the popular boy, several young males, lyrics for the band’s songs… And you know what? I did run away screaming TOWARDS the next book because OMG WHAT WAS THAT END?! And that brilliant writing style? And all the fun even when the drama got heavy?! My first rating for the book was four stars, but I’m officially raising it now to FIVE BIG BEAUTIFUL stars!

You can read here my reviews for The Cemetery Tour series!

I’ll try to be constructive and short on this review, as I feel I have been writing too much lately, haha!

The narrative style was first person from Mel’s point of view. Thank all gods and entities that we have hit it off, haha! While I do tend to have bigger issues with this kind of narrative, Jacqueline knew her business enough to mix Mel’s storytelling with her thoughts and randomness, making the book much funnier and lighter to read ❤

The plot was FULL AND INFESTED with twists and I’m proud to say I couldn’t see any of them coming, haha! But, to be honest, I kind of didn’t know what to expect from anything on the book, as it was my first time reading about a band’s daily life. I have read about models, about solo singers and actors, but never a whole band and omg, the experience was amazing.

The characters are incredibly kick ass. Mel is somewhat shy and awkward at times, but she does everything for the guys and her loved ones to be happy. Mel is the observant kind of narrator and this is vital in a series with so many main characters – despite the one sided POV, we get to know everyone in the boat [haha] like Mel and we pay more attention to the small things. Honestly, I can’t say how much I loved this book, haha!

Now, to the complaints because they are always there, even in 5 stars books: sometimes, the book gets too carried away trying to pass the image of how the perfect band acts in all times regarding public appearances and public treatment. I feel like there is too much assuring of how The Kind of September loves their fans and too little on them actually showing it, you know? Also, it was fantastic that Jacqueline took the time to write SO MANY lyrics for the opening chapters, but I have to admit it was a work lost on me =( I was more interest on what was coming next than on the lyrics – and yes, while the lyrics hint at what will happen on the chapter, I do prefer to just start it asap, haha! Sorry, Jackie =( You are a wonderful song writer, tho!

To wrap this review, I’ll leave here some awesome quotes from Boy Band that will show you just why you have to read it RIGHT NOW:

“I try to act like I don’t care. Which I don’t. Not really. You know, in an alternative universe.”

“I mean, that’s the number one quality you look for in a guy, right? Being able to correctly identify your favorite Beatles?”

“I have no idea how you ‘accidentally’ see a movie, but clearly, it was a traumatic experience.”

“Unfortunately, I think infatuation is the most socially acceptable form of insanity.”

“I’ve got to be honest with you, while I don’t like being yelled at, I’m kind of impressed that she knows the word prepubescent.”

And those winning dialogues:

Sam: I’ll have you know that the last girl I dated was very smart.

Joni: That’s because you were in Kindergarten and she got a gold star for drawing a pony.

Mel: Why are you so gross?

Sam: Would you want me any other way?

Mel: Oh, darn. You just ruined all my holiday plans.

If you like Young Adult, Contemporary Romance, Music, Boy Bands and AWESOME writing, just pick up this series and come back to fangirl with me later ❤

Thank you for reading and, once again, thanks to Jackie for my review copy!