Hi, there! Welcome to Bewitching Book Tours book tour for the fourth book in the Demon Hunting series, by Lexi George: Demon Hunting with a Dixie Deb!

Demon Hunting with a Dixie Deb

This Debutante Is Having A Ball!

Way down south in the land of cotton, one belle’s plans are soon forgotten–when Sassy Peterson drives her Maserati off the road to avoid a deer and lands smack-dab in the proverbial creek without a paddle. The Alabama heiress should have known something weird was going on when she saw the deer’s ginormous fangs. Hello, Predator Bambi!

But nothing can prepare her for the leather-clad, muscle-bound, golden-eyed sex god who rescues her. Who wears leather in May? That’s just the first of many questions Sassy has when her savior reveals he’s a demon hunter named Grim. Also: Why would a troop of fairies want to give her magical powers and rainbow hair? Why would a style-challenged beast called the Howling Hag want to hunt her down?

Most importantly, what’s a nice debutante like Sassy doing in a place like this anyway? Besides feeling Grim…

With a drowsy sigh, she relaxed against him and went to sleep.

Grim stilled. A surge of lust hit him, hard and fierce. Sassy smelled delightful, a dizzying combination of summer roses and female. Curling tendrils of her hair lifted to caress his jaw, like flowers reaching for the sun.

I am her sword and shield. The vow rose unbidden in his mind. Here and now I vow to protect her, from anyone or anything that threatens her.

An admirable sentiment, I am sure, the Provider said, but hardly necessary. She leaves tomorrow, and you return to the hunt. That is good, is it not?

Then why the hollow ache in his chest?

And it’s my deepest pleasure to announce that the author, Lexi George, agreed to stop by and talk to us about her new book 😀

Thanks so much for being here today, Lexi! I asked Lexi to tell us 5 curiosities about the series, so let’s see what she has got ❤

Curious South – Or Five Weird Things About My Writing

First of all, let me start by saying that the entire writing process is weird. At least, that’s the way it’s been for me. I’m a plotser, you see, a combination of a pantser, those writers who write by the seat of their pants, and a plotter, those writers who graph, chart, and plot the heck out of their story before they begin. With me, usually the title comes first, then the hero and heroine, and some vague, mushy idea of the hook for the story. Hook, you say? What’s that? Here’s an example. Demon Hunting with a Dixie Deb is a fish-out-of-water story. Sassy my heroine, is a rich, pampered former debutante who ends up running a timber mill. She knows nothing about timber. Or mills. Fish-out-of-water, see? That’s the hook.

Once I know the hook, I start writing and plot as I go. I am also a linear writing, meaning I start at the beginning and bully my way through until the end, with a lot of hair pulling in between. What amazes me is the way the subconscious mind works. I’ll get to the end of a story and, to my amazement, some tidbit I dropped at the very beginning of the book and thought unimportant, will wind up being significant. I didn’t plan it that way. I didn’t anticipate it. It . . . just happens. Weird. Here are a few more curious things about my writing:

Supernatural oddities: In book one, there is a talking dog and a fairy cat. In book two, there is a demonically possessed Chihuahua. One of the characters in book three is a vegetarian zombie. Oh, yeah, and there’s the Wampus Kitty, a feline harbinger of doom. In book four, I have a sentient car, a giant catfish, and an incorporeal know-it-all called The Provider.  Strange things happen in Hannah, my fictional town, and it is a magnet for supernatural creatures.

Hair fetish: I had no idea when I started writing that I apparently have a hair fetish. In book one, Addy, my heroine, gets a supernatural do-over when she’s attacked by a demon and her hair turns platinum blonde. In book two, Evie, my heroine, makes a line of magical hair products called Fiona Fix-it, which repairs the ruined hair of one of my secondary characters, Mullet Woman. In book three, Verbena Skinner, also gets a makeover which includes a new hairdo. In book four, Sassy, my heroine, gets fairyfied. One of the side effects of her fae transformation is glittery hair that sparkles when she gets emotional. See? Hair fetish. Who knew?

Food: Anyone who reads my books quickly figures out that I like food, and I like to eat. The local watering hole in my imaginary town is The Sweet Shop, and I enjoy describing Southern food in great detail.

Crater: The source of the supernatural woo-woo in my small town is a crater created millions of years ago when a meteor smashed into earth. It so happens there’s a similar crater (without the magic, unfortunately) in the small town where I live. I actually live in a neighborhood on the crater, though it’s covered with trees and is hard to spot. People come from all over to study the crater and the impact site. When I was looking for a reason to explain the woo-woo in my fictional town, the crater seemed a feasible explanation.

Characters sometimes just “appear”: I’ll be writing along, thinking I know where the story is going and wham! A character will show up with no warning. It happened in the novella in So I Married A Demon Slayer. My heroine in that story finds out on her wedding day that her husband is an immortal demon hunter, and the “mugging” he saved her from was, in reality, a demon attack. She’s been changed and is no longer human. She jumps into a Mary Kay car and runs away from the wedding. She darts into a convenience store to satisfy a sugar craving . . . and that’s when it happened. The woman behind the counter appeared, fully formed and without any conscious thought on my part. Nicole, AKA “Mullet Woman,” turned out to be such a fun character to write that I brought her back in book two, Demon Hunting in the Deep South.

This unplanned character manifestation happened again in Demon Hunting with a Dixie Deb. Grim, my hero, wakes up in the woods after going on a bender on chocolate. What, I didn’t tell you? My tough, macho demon hunters are impervious to alcohol and drugs, but they get smashed on chocolate. Anyhoo, Grim wakes up, feeling like death warmed over, and accidentally sets the woods on fire. Enter, to my surprise, Taryn Kirvahni, a supercilious female demon hunter who sets Grim’s teeth on edge and generally annoys the stew out of him. Although I had a vague notion of introducing the Kirvahni at some point in the books, I had no idea Taryn was going to make an appearance in book four.

So, there you have it, some curious things about my writing.  In all, I have penned seven books, and the process remains a mystery to me.

Thanks again for being here today, Lexi! ❤ And, of course, thanks for indulging me, haha! 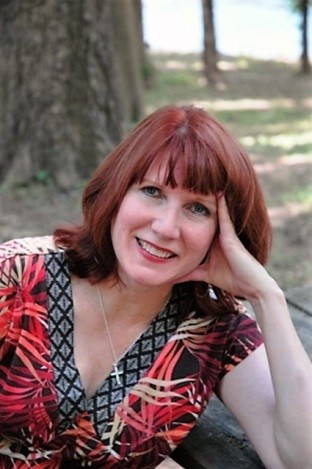 Lexi George writes snarky, Southern-fried paranormal romance for Kensington. Her debut novel, Demon Hunting in Dixie, was released in 2011, and a novella and two more demon hunter books followed. Demon Hunting in a Dive Bar, the third book in the series, was nominated for a RITA in 2014. The fourth book, Demon Hunting with a Dixie Deb, is due to be released May 24, 2016. Lexi enjoys reading and writing romance, but her first love is fantasy. A Meddle of Wizards is the story of Raine Stewart, a sheltered, sickly young woman who comes into her own when she’s transported to a magical world, discovers her burgeoning powers as an adept, and faces the evil wizard who killed her parents. Lexi’s day job as an appellate attorney requires reading transcripts filled with murder, mayhem, and worse. Perhaps this is why she enjoys stories filled with humor, action, adventure, and magical creatures. She has a violent aversion to sad movies, having been scarred by Old Yeller at the age of nine. She drinks tea, not coffee, and has never seen The Exorcist, because she is a world-class chicken. She is the third of four children, with all the attendant neuroses.

One lucky winner will take home a $50 Amazon Gift Card!

That’s it, thanks for reading! And thanks to both Lexi for being here today and Bewitching Book Tours for my spot on this tour 🙂