Hi, there! Welcome to the book blitz for Tempting the Light, first book in the L.A.M.P.S. series by Bonnie Gill! This one is brought to you by Bewitching Book Tours 🙂 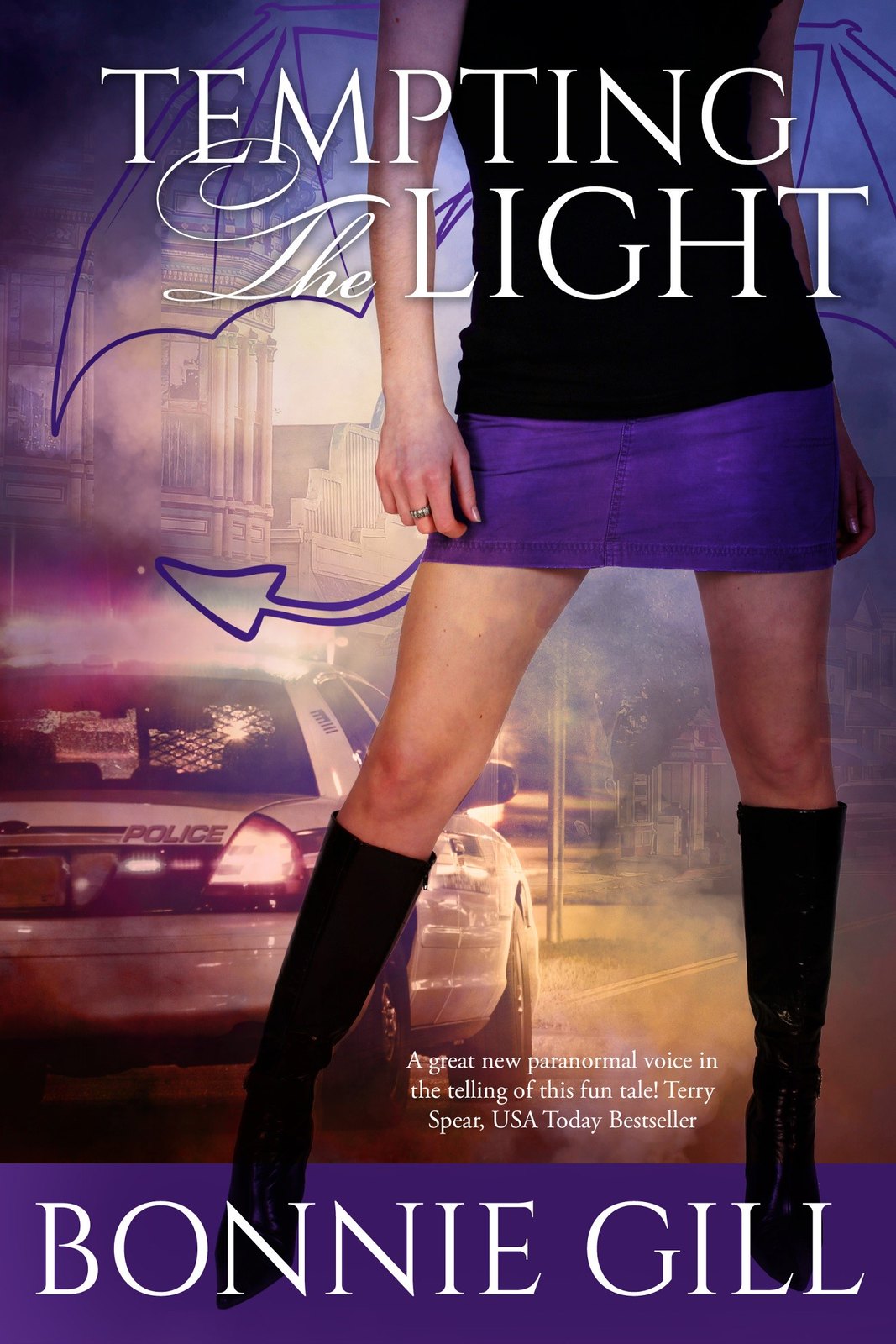 Bad luck magnet Abby Fitzpatrick gets fired, catches her boyfriend cheating with a mime, and is cursed by an evil genie who pops out of a tampon box. She’s bound and determined to remove the spell, and as fate would have it, the hottest guy she’s ever met is out to kill her.

River Stone, a Cryptid hunter for Legends and Myths Police Squad (L.A.M.P.S.), poses as a sheriff for Abby’s hometown of Haber Cove, New Jersey. He’s out to find and capture a man-eating gnome and bag the legendary Jersey Devil monster. Little does he realize, the woman who catches his heart is the same creature that he was sent to destroy.

Tempting the Light is the first novel in the L.A.M.P.S. series that features hunky secret agents who find true love while hunting and slaying dangerous Cryptids.

Tempting the Light is only available in ebook format at Amazon right now, but you can read it fore free if you use Kindle Unlimited services 😀

And we have an excerpt to prove just how much unlucky Abby can be, haha!

Abby Fitzgerald didn’t expect a surprise birthday party when she got home today. She didn’t expect bold colored daisies or pretty wrapped gifts. But most of all she didn’t expect to find her live-in boyfriend Burt, engaged in a spooge-a-paloosa fest with a chick dressed as a mime. Her crazy old grandmother warned her she would be cursed on her twenty-fifth birthday, but who would have believed it?

Burt slapped his body up against the mime from behind in a vigorous frenzy on the sleigh styled queen-sized bed. The woman’s hands and painted white face pressed up against an invisible window with his arm wrapped around her waist to keep her vertical.

Seeing Abby, the mime’s lips parted into an “O” breaking the sex-me-up red heart painted across them. She covered her mouth with her gloved hands.

Abby stared in horror at Burt with his mouth open and eyes closed, savoring the sheer ecstasy of screwing the mime. Her heart shattered shooting pulmonary shrapnel up her throat. He never looked like that when they were together.

“You’re freaking cheating on me?”

Abby dashed into the hallway bathroom, and rummaged in the crowded cabinet under the sink. “Where’s the damn Scrubbing Bubbles? Or better yet, the Borax?” She tossed a mildewed loofa and a half used bottle of honeysuckle hand lotion over her shoulder. They landed not far from Burt’s bare feet.

“Abby, I’m sorry. I was going to wait until after your birthday to tell you.” He placed his hands on both sides of the bathroom door trim and leaned into the room. “What the hell are you doing?”

“I’m trying to find something to scour the sick image of you and your mime girlfriend from my eyes. Better yet, I’ll get the melon ball scooper.” Unable to contain herself, she whipped a can of lemon scented shaving cream at his head.

He ducked but the foaming missile bounced off his hair-sprayed-until-bullet-proof hair. His nostrils flared like an enraged bull. Too bad that was all he had in common with the animal. “You’re acting irrational. Stop it.”

True. Right now she couldn’t even think straight. “Get away from me.”

“It doesn’t have to be like this,” he said under his breath.

She ignored his statement and shoved his skinny five-foot-four-inch unclothed body aside and marched back into the bedroom.

The mime perched on the edge of the bed with a sheet wrapped around her naked body. She held up both hands in a stop gesture and waved them back and forth.

“Abby. Please settle down.” Burt trailed behind her.

“Settle down? Do you know why I came home early?”

“No.” He glanced at his watch then looked absolutely baffled.

“Because I got fired today, Burt.”

He tilted his head to the side and wrinkled his rather large forehead. “Oh. Well, how were you planning to help me pay the rent then?”

She wished she had a gun to shoot the stupid out of him.

“Get out of my house.” She jerked on the mime’s cover-up sheet. The mime pulled back. Abby yanked again but then let go, the mime did a back-flip somersault off the bed. Her pasty white face popped up on the other side of the mattress like a demented rodent in a whack-a-mole game.

“This is my apartment,” Burt raised his voice louder and pointed at the mime. “You don’t have to go anywhere.”

The mime amplified her smile by pointing to the corners of her lips and twisting her fingers in her imaginary dimples, then she proceeded to skip and do a naked happy dance in circles around Abby.

Abby gave her a shove out of her way. “What the heck is her problem? Doesn’t she talk?”

Burt shrugged. “I don’t know. She hasn’t said a word since we met. It’s one of her perks.”

Abby slammed her fist into the side of her leg to keep from punching the detestable smart-ass smirk that spread across his face. Her fantasy of a blissful marriage and white picket fence shattered in one measly, heinous moment.

“How long has this been going on? Wait, don’t answer that. I don’t want to know.” She marched over to the closet, grabbed her blue duffle bag, and stuffed a few pairs of her size two jeans into it. She then looked down at his exposed mini-manly parts and raised a questioning brow.

Burt’s eyes widened to a bug-eyed look and then he scattered to pull on a pair of whity-tighties.

She stalked over to her dresser, pulled out different colored T-shirts, and a stack of clean underwear to shove in her bag. She hesitated for a moment. “The other day, I saw you in the jewelry store buying something. I—I thought you might.”

Before she could finish, the mime flashed the back of her hand at Abby. A pink princess cut rock set in a platinum setting adorned the ring finger of her left hand.

Burt sent a reprimanding scowl in the mime’s direction. “It just happened.”

Her heart went numb first, before the shredding feeling of a weed-whacker tore through it.

“Wonderful.” She stormed out of the room and into the kitchen, pulling worthless knick-knacks from their displayed posts and cramming them in her bag. A satisfied smile lifted her cheeks when she held up Burt’s prized Fifty States Commemorative Quarter collection for him to see.

“You wouldn’t dare. Put that back.” He swiped at the coins but missed.

“Yes, I would and I’m leaving you.” She jammed the cardboard display in the duffle, and swung her bag of belongings over her shoulder.  “I hope you have many ugly clown babies.” She slammed the apartment door behind her.

While trudging to her car the whooshing blood of each heart beat thumped like sonic booms in Abby’s ears. She tossed her bag into the trunk and marched over to Burt’s yellow Volkswagen Beetle. She pulled back her foot and gave it a hard kick in the tire. I wonder how many girlfriends he can cram into that thing at one time?

She sat behind her steering wheel in silence. Too bad she couldn’t pull a do-over for the day. Her grandmother must have been psychic. 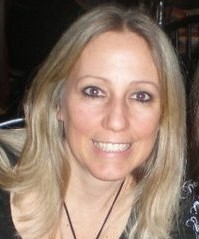 Bonnie Gill grew up in the suburbs right outside Chicago. As a child she loved making up ghost stories at night to scare her sisters and friends.

She writes Paranormal Romance with a twist of humor. When she isn’t writing you can find her on a haunted tour, volunteering at pet rescues, or digging around in her fairy garden waiting for fairies to show. She’s a member of Romance Writers of America, the Fantasy, Futuristic, and Paranormal chapter and the Windy City chapter.

She lives in Northern Illinois with her four rescue dogs, a big fat cat, and her ever patient boyfriend who laughs at all her goofy jokes.

She loves to hear from her readers.

That’s it, thanks for reading and stay tuned for more news today 😀