Hi, there! As I said yesterday, on the next week or so, I shall bring you a manga review per day, so I can catch up with myself 😀

Today’s series is Only Serious About You, from Kai Asou-sensei ❤

Nao is a divorced father that works on a nice and friendly restaurant. He’s friends with all the team and loves what he does. Unless he is obliged to serve this weird client named Yoshi.

Yoshi is a salaryman that goes to Nao’s restaurant practically every day, as he lives nearby. He makes no secret of his attraction towards Nao, even knowing that Nao is heterosexual. On every visit, Yoshi does his best to be noticed by Nao as more than a regular costumer.

All was well until Nao’s daughter, Chizu, falls sick and Nao’s only chance at healing his daughter properly is to accept Yoshi’s offer and stay at his place for some days. Nao doesn’t want to be a burden, but his daughter’s well-being comes in first place, making him move in with Yoshi.

And this was just the opportunity that Yoshi needed to seduce Nao.

This series was a rollercoaster. In a good way, but I was always left a mess, haha! I loved Nao since page one and I wanted him happy. As for Yoshi, the guy is perfect even on his flaws. He captured my heart and never faltered on his resolutions to conquer Nao’s affections, but never in a forceful way. Honestly, this series was so real and boys next door that I wanted to hug my e-reader ❤ It has only two volumes and it is a proud five stars one 😀

The narrative pace was steady, as we witness Nao and Chizu’s daily routine until she falls sick. Yoshi was always there, telling all about his life to Nao – you know, amorous style – and trying to pick him up, but on a fun and cool way. The perspective is mainly from Nao’s point of view, but we have some Chizu, Yoshi and Nao’s boss povs too.

The plot was simply, but very complex on the human level. I mean, Nao’s life is very difficult and he barely has the money to spare. He and Chizu are happy, but Nao wanted to spend more time with his daughter, just like Chizu would love to play more with her papa. Nao has a glimpse of he could have when he is forced to move in with Yoshi and this leaves him confused: Yoshi lives in the front of the restaurant and only a few blocks away from Chizu’s daycare. And, as a salaryman, he leaves work in time to get Chizu on daycare and stay home with her, eliminating the nighttime daycare that Nao also had to afford. He finally has the time for his daughter, but also has to defend himself against Yoshi’s disturbing perfection, as he still is a man and Nao is still heterosexual. So simple and so complex.

The characters definitely were the strongest point on this title, along with the art. Nao and Yoshi were so well developed that I fell in love with both of them, haha! (I usually pick a favorite male on my gay couples.) There was no insta-love, not even on Yoshi’s part, as he first was attracted to Nao and came to love him from their daily acquaintanceship. Nao was the typical hardworking guy, too focused on his career and family and bills to think about love. Yoshi also was a hardworking guy, but way far from typical, with an unique past and way of handling his feelings. Chizu was the most adorable child in the world and that makes me think that the insta-love on this series is on her part with Yoshi. From day one, Chizu and Yoshi fall in love with each other and become daughter and stepfather. The only one that didn’t see it coming was Nao, haha!

A good point on this series is that, despite the dramatic main theme, both Nao and Yoshi are super funny. They pick on each other all the time and make the reader laugh out loud well, at least this particular reader. This is a small sneak peak of how they handle each other: 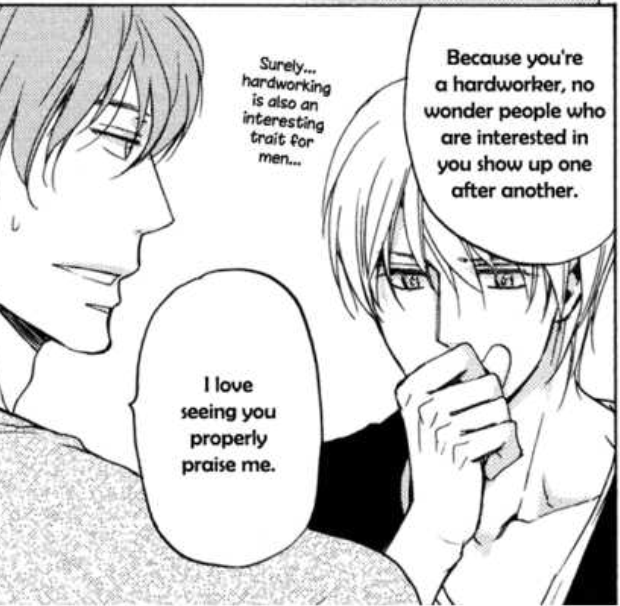 SERIOUSLY, I CRACK EVERY TIME I READ THIS LOL

And, as we are on this subject, we totally have to talk about this manga’s art work. Asou-sensei has one of the most beautiful traces that I ever seen, without being too perfect bordering pain and without being common either. I need some posters of this series on my bedroom now:

Yes, lots and lots of pictures* ❤ Because they are that good together! /o/

Overall, if you love daily life mangas, drama, funny and beautiful males trying to have a family together and perfect art, just read Only Serious About You ❤

That’s it, thank you for reading! This week, we will have a manga review per day until I catch up with myself, so please bear with me. You know, if WordPress doesn’t mess my scheduling agenda once again.

*ps: I do not own the illustrations, they were found on Google, belong to Kai Asou-sensei and were used with illustrative purposes only 🙂

One thought on “Only Serious About You, from Kai Asou”