Hi, there! Live long and prosper, scheduled blog, haha! Hope you people are hanging in there on this Tuesday 🙂 I can’t wait for Friday to be here, as I’ll be defending my ~famous~ dissertation, haha! But enough gibber jabber, let’s go to today’s book review: Searching for the lost tales: the meaning of the female functions in Perrault’s fairy tales, from Mariza B. T. Mendes! This book actually is a Brazilian book, I took the liberty of translating its original title for the sake of all my readers 🙂 Original title: “Em busca dos contos perdidos: o significado das funções femininas nos contos de Perrault”. 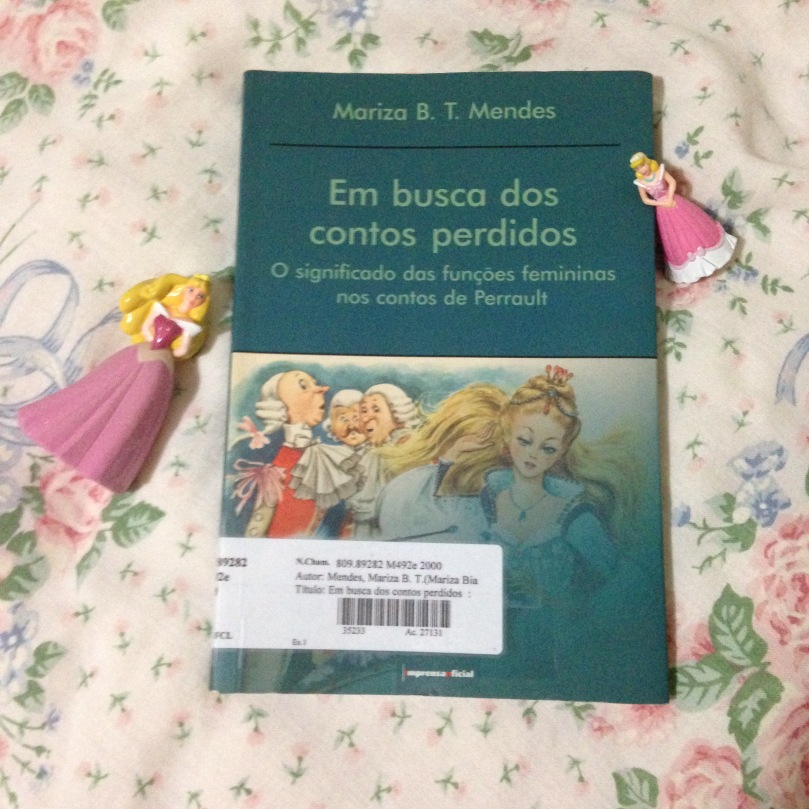 This book is an academic one, a doctorate dissertation to be more exact, so I’ll tell a bit about the author’s theory and then I’ll do my analysis, instead of telling a story – there is no story to tell, haha!

Mendes sears several academic theories involving Charles Perrault’s fairy tales birth, as she wanted to understand why the book made such a fuss at time and survived through generations as it did. Mendes also wanted to understand which was the social function behind the leadership of women as main characters of Perrault and how did those tales fared when they came to Brazil. The author also talks about the mystery of the paternity of the book, as Charles Perrault never said or documented the books as his creation and his son, Pierre, besides having wrote the preface of the original edition, also had the print rights for the book.

THIS BOOK WAS SO AMAZING, OMG I NEED MORE, PLEASE, WRITE MORE ABOUT IT, DEAR MENDES!!! *—* Honestly, it was such an educative and fun read! Mendes language is more technic, than a regular book, but I’m in love with fairy tales since I’m a toddler and I love to study everything that I can. Meaning: I needed to learn which were the female functions inside of Perrault’s tale in the moment I saw this book! I got this copy at my college library and now I want my own copy for hugging ends and all 😉

Let’s get serious now. Mendes theory is well tied to previous ones about fairy tales in general, like Propp’s, Jung’s, Bettelheim’s, Soriano’s and many others and she answers all her proposed questions from the beginning of the book during the narrative. It may sound a little stupid to say that, but it is very usual to see dissertations that doesn’t or aren’t able to answer their own questions, so it was very awesome of her to manage that, haha!

Mendes tells us about the origins of the fairy tales and popular tales in general, about the fairies and magical women present on those tales and how they represent the old pagan goodness from matriarchal society, from ancient times (yeah, fairy tales are that old).

Then, she does a brief biography of who was Charles Perrault and why on earth he decided to collect and publish popular tales into a book, being a “noble bourgeois” and all. His history is no different than thousands of other bourgeois trying to elevate their social status on King Louis XIV’s France, so it is curious that Perrault had this initiative and Mendes explains us all about it 🙂

The next part is all about the fairy-tales’ book paternity, as explained, and the conclusion of all authors, including Mendes herself, is that both father and son wrote it together: Pierre collected and compiled the tales and Charles edited them and wrote their moral in verses.

After enlightening all points of the life and career of Charles Perrault and his son, Mendes starts to analyze the structure of The Tales of Mother Goose, explaining why they got so popular and immortal. The key always seems to be simplicity, haha! My favorite part is inside this analysis, as she raises a very curious question: if the lead characters of Perrault’s tales are mostly women, was Perrault a kind of feminist of his time?

I’m afraid that the answer is no, as all those tales have an edifying purpose. Women were the main characters because they needed more example on how to behave according to what society awaited from them on their social roles: they had to be kind, pure, innocent, submissive, beautiful, and permissive, and always have faith. The marriage should be the solution to all their problems and they should be punished if they didn’t obey their husbands. Family, union, was everything and Perrault found that out three centuries before we did (Mendes words translated and adapted, haha!).

I know what you may be thinking: OMG, THE HORROR, FAIRY TALES ARE A DEMON THING, WE WOMEN MUST GO FREE, BLA BLA BLA BLA.

I see this point differently. At that time, on the 17th century, fairy-tales were used to this end because the dominant class wished so. The stories survived, but their “real” morals are gone. Perrault’s (and Grimm’s, for that matter) tales won’t trap women into any kind of fate in the occidental world if they don’t want them to. Society has changed, women have changed.

We have two ways of looking at this: a) we all burn our dear childhood books and start Third World War officially; or b) we accept the old purpose of this stories as a part of their past and enjoy them now as just fantastical tales in wonderful worlds that inspired the best Disney movies ever.

Sorry for major reflection, haha! But I really think that everything is ever changing in the world, as did the fairy tales. It’s not fair to condemn them for the acts of their father 🙂

Overall, this book was a blast for me and can’t wait to have my own copy of it to hug ❤

That’s it! Thanks for reading and sorry if I said something offensive! Not my intention at all 🙂 What are your thoughts on fairy tales?

One thought on “Searching for the lost tales: the meaning of the female functions in Perrault’s fairy tales, from Mariza B. T. Mendes”